Is 'Fight the Fire' Too Hard? Turning Flurry Event Parameter Logs Into Insights

All of the code used here is available on GitHub in this repo. I’ve also included some sample data for you to work with, located in the following .csv files:

These files are formatted exactly as they arrive from Flurry. The data contained in these files is not our actual data (I generated it specifically for this purpose), but the distributions are nearly the same as in our actual data. </em>

This document accompanies the post titled “Fight the Fire v3.0 is Coming! Here’s What to Expect” that was originally posted on ZippyBrain.com on May 20th, 2015. Link to the Article. The code included here will show you how I used Flurry event parameter data to find out which levels in Fight the Fire are just too hard.

Flurry makes it super easy to access all of your apps’ event parameter data, but you have to know where to look. To get to it, follow these steps:

In this case, since I’m interested in comparing different events with the same parameters, I repeat steps 2 to 6 to get data for startRound and then get data for gameEndPopup_WON.

Once I have all this data, I can use R to merge it together and plot it. Doing this makes it really easy to see which levels are causing the most trouble.

Before we get started, I’m going to tell R where the events logs are located and what they’re called.

For now, let’s just see how many times each level has been attempted. I’m just going to look at startRound event data. This code will read the unmodified Flurry event parameter CSV.

Now let’s see which levels get played the most (I’m not worried about making the graph super attractive yet): 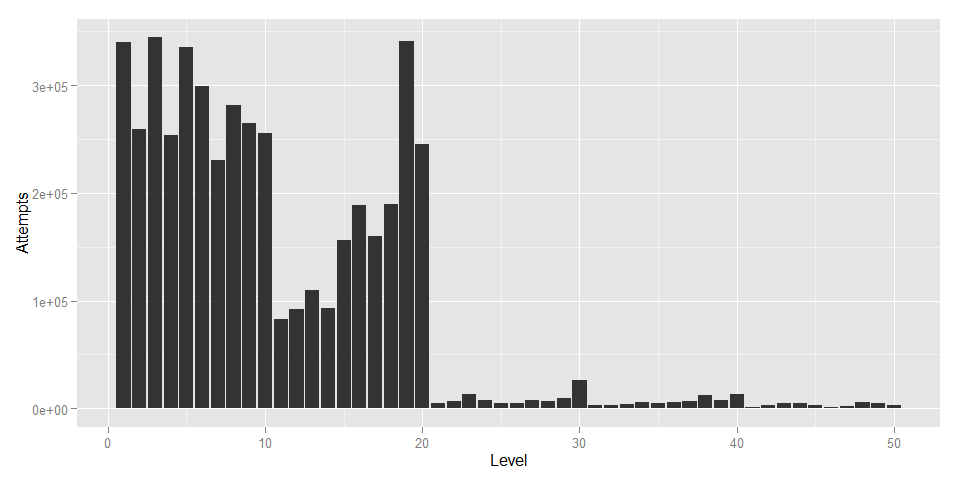 Levels 1 to 20 are free to play, which explains why those levels have been attempted so many more times than 21+.

##Step 2: Which Levels Get Finished the Most?## 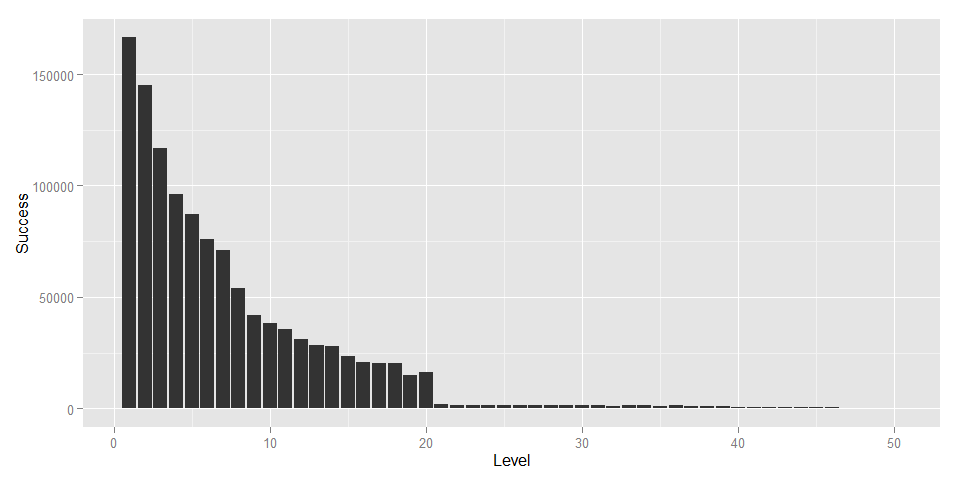 This data looks like it follows an inverse exponential distribution pretty closely. I was surprised to see that the gameEndPopup_WON events followed a distribution like this, while the startRound events did not.

To make it easier to compare attempts vs. successes for each level, lets put the data together.

Now that the data is all in one data frame, we can plot the comparison:

The last plot helps us look at the overall trends, but let’s drill down a little bit deeper to see where players are running into problems. First, I’ll find out what the success rate is for each level by dividing the total sucessful attempts by total attempts for each level. 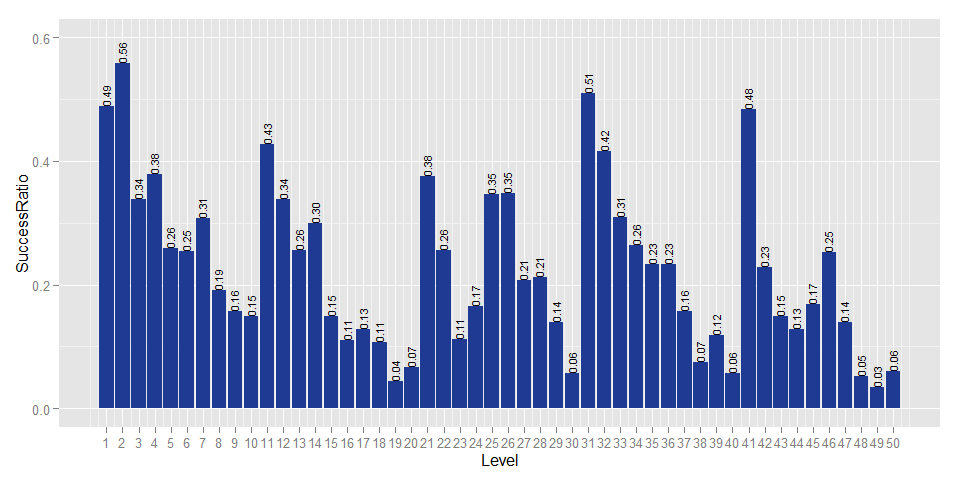 Now we can start to see a meaningful pattern. Within each biome (each of which is 10 levels), the first few levels are easy, but they get progressively harder towards the end. We designed the difficulty progression to challenge players a lot towards the end of each biome (so, levels 8-10, 17-20, 27-30, etc). Clearly though, especially in the first two biomes, we made that progression too step. We really want players to experience levels 21-50. If players are getting stuck on level 19 with a 4% pass rate, that’s something we need to change, hence the upcoming update.

I hope you found this useful! If you are working with Flurry data for a game with lots of levels, you may find these techniques useful for your own purposes. Please tweet any questions or comments to @ZippyBrain.